Dale, Patrick, Teresa, and all the team at ADG are very sad to announce that our founding director Ian Potts passed away peacefully at home surrounded by his family on Wednesday 22nd September.

Following his retirement in December 2017 he had been bravely coping with illness and although Ian wasn’t physically healed in the way that had been hoped for, he showed incredible strength in his mind, body and spirit, until the very end. An inspirational man to all, and especially to us in the practice.

Ian led ADG with incredible ambition and enthusiasm. He was involved with the creation of numerous high profile buildings around Plymouth and the south-west and he was always willing to share his knowledge and ideas. One of the ways that he did this was by acting as a mentor to numerous students and graduates throughout his time in practice. He also carried out this role with Dale and Patrick who have been fortunate enough to work alongside him for a number of years.

Ian was recognised by his peers at the Michelmore Awards in 2018 with a Lifetime Achievement award (John Laurence Special Contribution Award) and is credited with the creation of some of Plymouth’s notable buildings.

Ian guided Dale and Patrick to become the sole directors of ADG following Marc and Phil’s retirement in April 2020. They will continue his legacy and continue developing the practice he founded. He will remain with us in our shared memories, and he will be spoken about often in the practice as we recall the things he did and said.

Ian’s other great passion was, of course, his family who inspired everything that he did. Our love and thoughts are with his wife Zillah, his sons, daughters and his grandchildren at this sad time. We hope that, like us, their memories of this truly remarkable man will bring them comfort.

There will be a celebration of his life at Plymouth Christian Centre on Saturday 16th of October at 2pm. All are welcome. 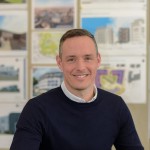 Chris joined the ADG team in 2004 after finishing his degree in Graphic Design at the University of Gloucestershire specialising in branding, design for print and web design. Chris’ particular interest is around how colour and typography can affect the appearance of graphic design.